In the heart of Italy lies one of its oldest centres, Perugia, known for its vibrant social life, university heritage and much more

A modern city with traces of its prominent past around every corner: standing atop a hill in the Tiber valley, Perugia, the capital of Umbria, is a renowned city of art and an effervescent cultural centre. Built as a fortified medieval village, it is encompassed by a mighty city wall. It boasts top-notch museums and beautiful nature, not forgetting chocolate, which it produces and celebrates at the mouth-watering Eurochocolate festival.

What to see in Perugia and surroundings

Città della Domenica: the children’s park of animals and fairy tales Città della Domenica (‘Sunday City’) in Perugia is the first family amusement park created in Italy in the 1950s. It has entertained generations for more than 70 years. This charming 'old-fashioned' park is designed to offer young children an unforgettable opportunity to see animals in nature and to discover the imaginative settings of their favourite fairy tales. This is the perfect place to spend a special family day, not just on a Sunday! An amusement and nature park Just six kilometres from the centre of Perugia, Città della Domenica covers 45 hectares of holm oak, plane tree and oak woods. It was created in the late 1950s by Mario Spagnoli, a Perugian entrepreneur and son of fashion designer Luisa Spagnoli. The area where the structure stands, historically named Monte Pulito (‘Clean Mountain’) because it lacked any vegetation, is now an area of lush greenery where many animals live, some in the wild. You can easily visit on foot or by taking a small train. At first, it was just a clay pigeon shooting range, but later it turned into an children’s amusement park, and since the 1980s it has also been involved in environmental conservation and teaching about nature. Straight out of a fairy tale Città della Domenica lets you immerse yourself in the world of children’s most beloved fairy tales: there is Pinocchio's village, Little Red Riding Hood's house, Merlin the Wizard's tower, the fairy forest, Sleeping Beauty's castle, and Snow White's little house. There are also plenty of more dynamic attractions, including a mini-kart track, Fort Apache, an Indian village where you can meet Red Bear, mini-motorboats, a riding school, a labyrinth, a Trojan horse you can all pile inside, and even a rocket that offers magnificent panoramic views of the city of Perugia and the Umbrian countryside. Various entertainment activities are organised daily for children and parents, from treasure hunts to an adventure game to save the park's resident animals. The falconers' show offers the exciting chance to see trained birds of prey such as owls, buzzards and eagles up close. One of the most recent attractions added to Città della Domenica is the Talking Forest, a 300-metre-long trail that teaches children to listen to nature. Designed by Bulgarian artist Kiril Cholakov, it allows children to be protagonists in a story in which they have to pass tests to become messengers for the trees. This exciting and educational experience teaches the value of the forest as an interconnected system of living nature. Animals in the wild Many animals roam free in the forest of Città della Domenica. Along the trails, you can spot mammals and birds common to the European continent, as well as exotic species that have adapted to the climate of central Italy. Among them is the mascot of the park, the Asinara donkey, with its white coat. This beautiful animal was saved from extinction thanks to the efforts of Città della Domenica, in collaboration with the Faculty of Veterinary Medicine of the University of Perugia. If you climb up the mountain, towards the rocket, you will find the wildlife route, where you can see kangaroos, reindeer, ostriches, yaks, llamas, Patagonian hares, dromedaries, African buffaloes and snowy owls. In the park, you can find all kinds of animals, from rabbits, both dwarf and giant, to hens, geese, turtle doves, swans, peacocks, cranes, storks, macaws, American bison, African mouflon, llamas and antelopes. Near the park’s exit, inside Darwin’s Tower, you will find a reptile house, homes to alligators, caimans, and venomous and giant snakes.
Umbria
Magazine

Gubbio and the "Festa dei Ceri"

Built on the slope of Mount Ingino and crossed by the Camignano stream, Gubbio is a magnificent Medieval Umbrian city full of history and monuments that have always fascinated illustrious travellers and authors the likes of Gabriele D’Annunzio and Hermann Hesse, according to whom the city “produces an absolutely stunning effect and has something unreal and perturbing about it”.
Umbria , Gubbio
Art & Culture

The last journey of the ancient aqueduct of Monte Pacciano It is the iconic monument of Perugia, located in the center of Piazza VI Novembre. Built between 1275-78, it is an icon of medieval sculpture, made of Assisi stone by Nicola and Giovanni Pisano. The Fountain, was erected in the center of the square to celebrate the completion of the Monte Pacciano Aqueduct. It consists of two large polygon marble basins on top of each other, topped by another in bronze. The lower basin consists of twenty-five sides divided into two panels depicting the 12 months of the year. The images represent agricultural work, allegories of arts and biblical episodes, and each month is accompanied by the zodiac symbol. In contrast, the upper basin, held up by a series of small columns, is decorated with 24 statues of distinguished men from Perugia, figures of prophets and Old Testament characters, and other allegorical, sacred, and historical figures. The basin at the very top has three statues supporting the amphora from which the water flows. These are the work of Rosso Padellaio.
Umbria , Perugia
Point of interest

Gothic Cathedral in Perugia Main place of worship in the city of Perugia that is the backdrop to Piazza IV Novembre. The Cathedral has been through several construction phases. The first structure was built from the ninth century above the ancient forum of the Etruscan-Roman city. The current church, designed to replace the pre-existing Romanesque cathedral, took on its current forms in the fifteenth century. The exterior is covered with red and white marble. The interior is characterized by a structure typical of Gothic cathedrals with naves of equal height. In the Chapel of the Ring or of St. Joseph the precious relic of the wedding ring of the Virgin is preserved. It is exhibited to the public twice a year. In the area adjacent to the Cathedral, in an evocative medieval setting, a museum is housed with an archaeological route where you can see the Etruscan-Roman origins of the site.
Umbria , Perugia
Art & Culture

A day in Gubbio, stone town of Umbria Known as the “city of stone”, it stands on the side of Mt. Ingino: Gubbio will immediately win you over with its medieval charm through its labyrinth of alleys and narrow streets. The long history of Gubbio Gubbio's origins are rooted in ancient Umbrian civilisation, as evidenced by the so-called Eugubine Tables written in the Umbrian language and dating back to the third-first century BC. You can admire them in the rooms of the Museo Civico in Palazzo dei Consoli. Gubbio's golden age began around 1000, at the time of the Communes. Under the leadership of Bishop Ubaldo, in 1100, the city won a war against Perugia. In the meantime, arts and crafts spread, including the manufacture of majolica. By the 1300s, the city took on the form it still has today. Some of the most beautiful buildings in Gubbio date back to this period. A walk in the centre Start your tour from the jewel of Gubbio, Piazza Grande or Piazza della Signoria, “hanging” square overlooking the city. On either side are the city's public buildings: Gothic-style Palazzo dei Consoli and Palazzo Pretorio, facing each other. Also in the square, take a look at Palazzo Ranghiasci Brancaleoni. A stone's throw away is the Renaissance-style Ducal Palace. From the gardens of the Ducal Palace, a beautiful view of the city. Look at the tall, narrow door at the side of the large gate: it is the Dead Man's Door. According to legend, the coffins of the dead passed through here. Along the walls, located just above the palace dating back to 1200, there are six gates, some of which are still decorated with paintings and city coats of arms. Among the churches, do not miss the cathedral of Gubbio dedicated to Saints Marian and James. Also worth a visit, the church of St Francis. It is said that Francis was welcomed here after leaving his father's house and all his possessions. Located at the foot of the city, where the market was held in the Middle Ages. Still visible is the long Loggia dei Tiratori built in the 1600s by the guild of weavers. Where their freshly woven woollen cloths were draped. The real wonder of Gubbio, however, is the Fontana dei Matti (Fools) in front of the Bargello Palace. Three laps around the fountain, getting wet in the presence of a resident of Gubbio and the Fool’s title is yours. Where to go nearby Just step outside the mediaeval walls of Gubbio and another world of surprises unfolds: the Roman theatre, the Roman mausoleum nearby, the Abbey of San Secondo, the 17th-century Madonna del Prato richly decorated with stuccoes and the Vittorina church built precisely where, according to legend, St Francis met the wolf. The Bottaccione Gorge The Bottaccione gorges, ideal for a trip, is just outside Gubbio. It is a deep gorge caused by the erosion of the Carmignano stream, but it is also rich in historical evidence. There is an aqueduct that runs along the gorge dating back to the Middle Ages. Also located in the gorge is the Monastery of Sant'Ambrogio, which stands near a prehistoric citadel dating back to the Palaeolithic period. The hermitage dates back to the 1300s and was known for its strict rules and inaccessible location guaranteeing silence and solitude. Don't miss the visit, starting with the underground caves and ending with the frescoes in the church. Atop Mount Igino: the Basilica of St Ubaldo The Basilica of Sant'Ubaldo is located right at the top of the mountain that watches over Gubbio, but don't worry, if you don't feel like hiking, you can reach it with a comfortable cable car and you will have the whole town at your feet. The urn with the body of Saint Ubaldo, patron saint of Gubbio, is kept here. The famous race of the Festa dei Ceri is on 15 May. The church is of medieval origin, but during the 1500s it was enlarged with the addition of the convent and cloister. Don't be fooled by the simplicity of the exterior, enter to admire the richness of the five naves and the frescoes depicting the life of Saint Ubaldo.
Umbria , Gubbio
Art & Culture

The Church of the Dominican Order

A historical and artistic jewel and beacon of central Italy

A small jewel full of characteristic narrow alleyways lined with majestic architecture, beautiful churches and treasured artwork and monuments. Above all, Perugia owes its fame as a city with a young, fresh and cosmopolitan soul to its two historic universities, which welcome students from around the world. This makes it the perfect destination for travellers of all ages in search of attractions of all kinds. Culture, entertainment and traditional flavours combine to provide a unique experience, a taste of the most authentic and profound Italy. 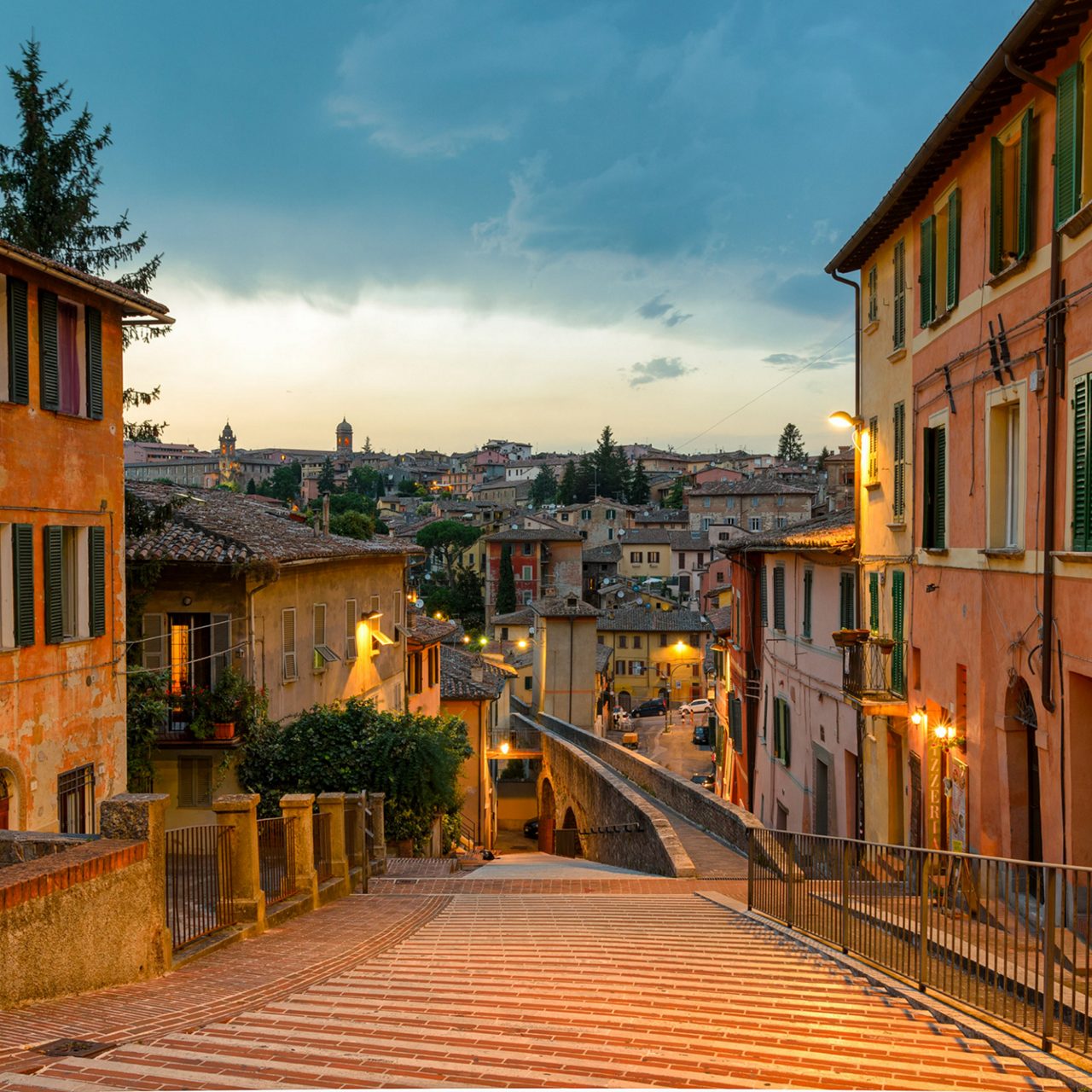