Bolzano, the precious jewel of Trentino-South Tyrol surrounded by mountains

Bolzano is a melting pot of cultures and faces: modern and tranquil, this capital of a region so compact and yet so vast is also rich in vestiges of the past. Forward thinking, yet deeply rooted in ancient traditions, it is a true marvel, surrounded by the Dolomites and well worth a lengthy visit.

What to see in Bolzano and surroundings

Bolzano and its surroundings

Surrounded by mountains and built in a natural basin, Bolzano is a charming city with a blend of German and Mediterranean traditions, traditions that are also visible in its architecture.
Trentino-Alto Adige , Bolzano
Region

In Alto Adige, the imposing peaks of the Dolomites form a backdrop to gentle slopes covered with vineyards, where rural life blends with modernity and visitors feel at home.
Trentino-Alto Adige , Bolzano
Shopping and markets

Bolzano is the queen of Christmas: and its market is the most irresistible

If browsing the Christmas markets is a serious affair for you, we advise you to choose one that is beyond compare, namely that of Bolzano. During the weeks leading up to Christmas, the historic city centre is transformed into a magical citadel of illuminations and decorations; scented with spiced sweets, it enchants children as well as adults. Around a hundred little wooden houses scattered around the squares and alleys offer the best of South Tyrolean handicrafts, while the wine cellars of the Wine Road welcome visitors for a special toast.
Trentino-Alto Adige , Bolzano
Nature

Where to admire the Dolomites at sunrise with sunrise tours

You cannot say that you have truly experienced the Dolomites and Alto Adige without having taken at least one sunrise trip, surrounded by postcard-perfect landscapes. Going for a hike and sunrise in Alto Adige is an exciting experience that begins in the middle of the night, when everything is still dark. Better still, if accompanied by a guide, try your hand atconquering a few peaks, but even ahike is within everyone's reach to enjoy an unprecedented panorama. One thing: don’t forget a torch and non-slip shoes.
Trentino-Alto Adige , Merano
Art & Culture

Mountains, lakes, ski slopes and nature: South Tyrol is also a land of medieval villages, some of which have joined the Club of the Most Beautiful Villages in Italy, by ANCI, the National Association of Italian Municipalities, to promote and reward those distinctive organisations that enhance the South Tyrolean territory. Specifically, there are five municipalities that have deserved this recognition for the magnificence of their landscape as well as their artistic, cultural and architectural heritage: Egna, Glorenza, Vipiteno, Castelrotto and Chiusa. These small towns, which will captivate you more than any others, can be visited in a day, but don’t be misled: they are full of attractions and beauties to be discovered. Each village contains a little piece of the South Tyrolean style and atmosphere, whether it is a stall filled with flowers, a bench next to a small mountain fountain or a small square overlooked by a collection of typical “erkers”, the covered balconies that protrude from the building structure. But that is not all: the story of these places still speaks to us through ancient walls and towers, mediaeval and late Renaissance buildings and porticoes where markets were once held and the local economy was made.
Trentino-Alto Adige , Egna
Magazine

In the Dolomites between spas and skiing, a wellness boost

Combine the relaxation of spa treatments with the pleasure of fun in the snow for a real wellness boost: here are some experiences to be had in the majestic scenery of the Dolomites.
Veneto , Recoaro Terme
Events

What to do in town

A city of great charm surrounded by mountains

Bolzano lies in the vast Etschtal, or Adige, valley, making it the so-called Gateway to the Dolomites – a border point between Italy and the Germanic world. With the backdrop of the mountains and breathtaking landscapes, the historic centre is small but has a huge personality, hosting various iconic monuments, from Walther Square to the Archaeological Museum. Bolzano entices with its rich traditional flavours, along the Wine Road and at its many restaurants. 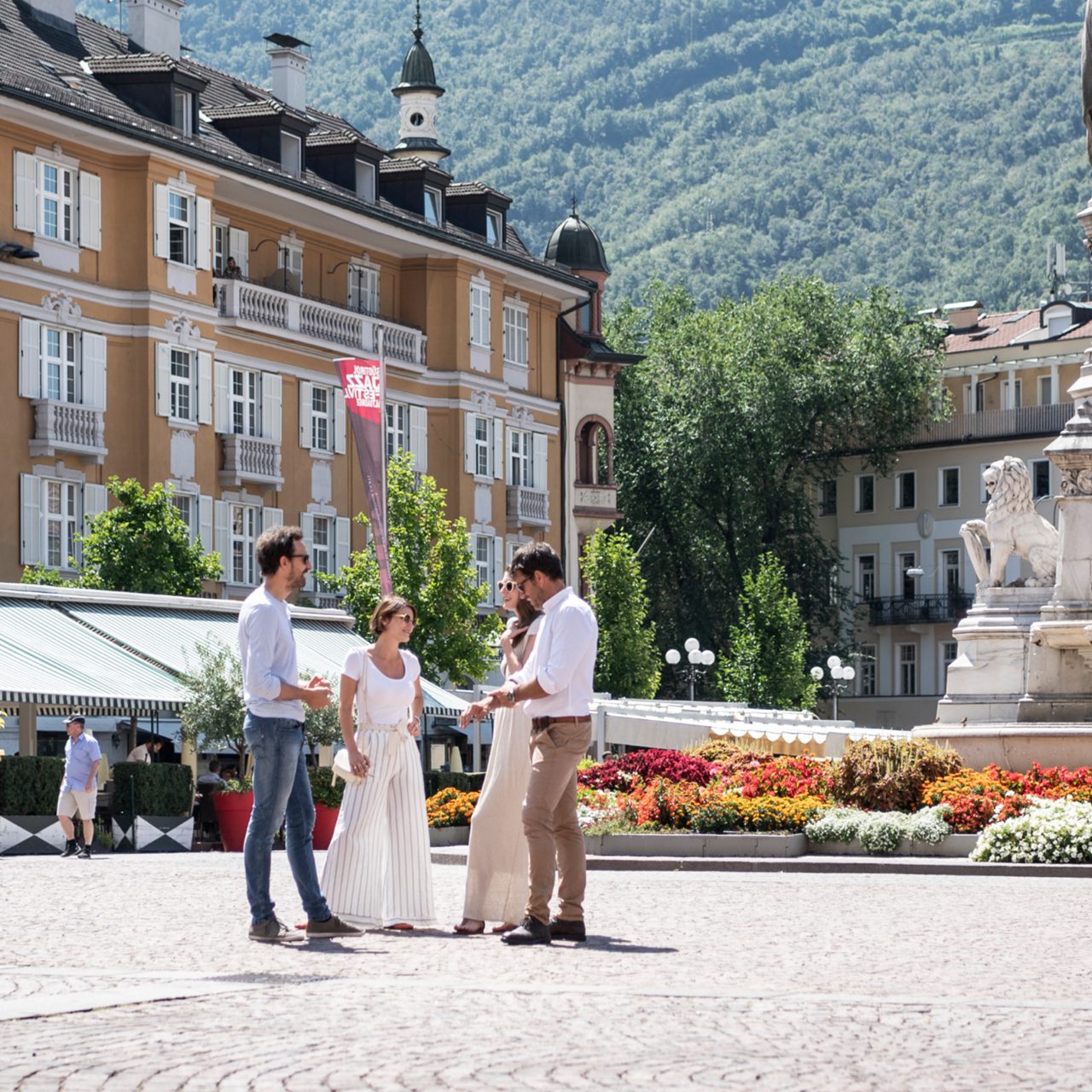 Find out more
STAY WITH US